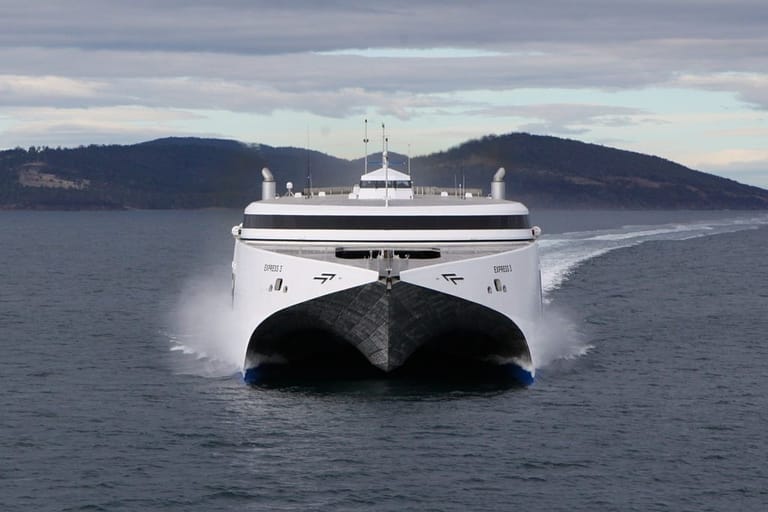 From the Electric Drill to Polymer Bank notes, from the Cochlear Implant to Google Maps – despite the small population of this country, we over-deliver when it comes to game-changing design and innovation. Being ‘girt by sea’ has meant that our innovation in maritime technology has been something Australians particularly excel at. Notably, the wave-piercing catamaran design from International Catamarans (Incat) in Hobart proved a significant evolution in naval transport, becoming demanded all over the world.

After the bridge re-opened, Incat specialised in the construction of fast ferries. After extensive research the company commenced specialisation in aluminium construction.

The traditional catamaran, developed over centuries in the South Pacific islands, is a fast, stable, two-hulled boat, but on choppy seas it gives a rough ride. With their ferries needing to operate in constantly changing conditions whilst giving passengers a comfortable and on-schedule trip, Incat saw a need to design ferries with the speed capability of a catamaran that could better counter the effects of rough seas.

Ship builder Bob Clifford and naval architect Phil Hercus joined forces in 1977 as International Catamarans and began developing their design for a wave piercing catamaran. By 1984 they successfully combined the strength and speed of the catamaran with a wave-piercing hull design called SWATH (Small Waterplane Area Twin Hull). SWATHs are used to stabilise giant oil platforms. Clifford and Hercus’s new-style cats ride steadily above the water while their hulls plough through the waves.

Their first prototype, 8.7 metre Little Devil (pictured below) first underwent trials in 1984. The results encouraged International Catamarans to proceed with a 28 metre Wave Piercing Catamaran (WPC), Spirit of Victoria, which entered commercial operation in mid 1985. Tassie Devil 2001 was launched in December 1986. The current range of Wave Piercing Craft still reflects the characteristics of these early craft.

Constant development of the Wave Piercer design led to larger vessels with increased speed, capacity and reliability. In 1990 the truly revolutionary design that made Incat Tasmania famous was delivered with Hull number 023. A 74m aluminium vehicle carrying vessel with distinctive hulls and a wave piercing centre bow that has since operated in 3 continents.

Incat Tasmania gained even further prominence in 1990 when their Hull number 025, Hoverspeed Great Britain, set a new record for the fastest time across the Atlantic ocean by a commercial passenger carrying vessel. The publicity that came with the record combined with the improved economics of operating faster, lighter vessels led to an ignition in sales from all over the world for Incat Tasmania’s impressive ships.

Incat Tasmania continues to construct their vessels in their Hobart shipyard today, and has delivered nearly 50 large WPC boats to customers globally, as well as other smaller ferries such as the fleet of 35m Sydney Harbour ferries. Ships in the WPC category have been built from 74 to 130 metres long and from 3,000 to 13,000 gross tons. The 99-metre Francisco (Hull 069) is the world’s fastest ship in commercial service and can achieve speeds up to 58 knots (107 km/h). Some Incat vessels of the 1990s have been operated by up to six shipping companies with regular name changes.

Incat Tasmania is a surviving example of the strength of Australian innovation, design and manufacturing. Having the courage and perseverance to challenge established understandings of product design can deliver unrivalled success, and Incat has experienced this over their decades of development whilst continuing to manufacture in Australia.