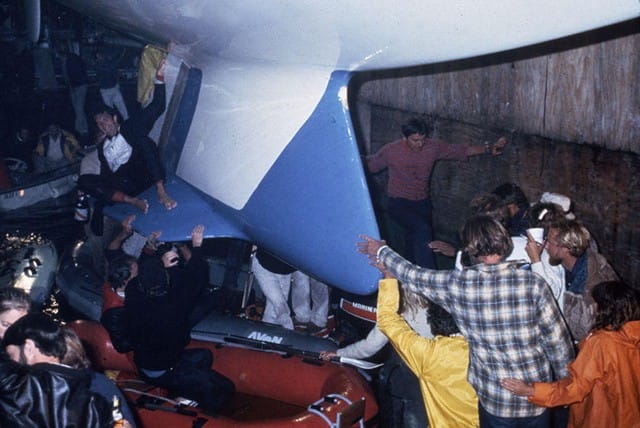 From the Electric Drill to Polymer Bank notes, from the Cochlear Implant to Google Maps – despite the small population of this country, we over-deliver when it comes to game-changing design and innovation. Brilliant Australian design can deliver far-reaching improvements in our everyday lives, but it can also deliver big wins in a historically significant sailing yacht race. No matter the perceived importance of the design, to many, the winged keel of the Australia II racing yacht was the perfect embodiment of Australian ingenuity and our desire to consistently challenge the status quo.

For 130 years, the Americans had dominated the America’s cup, considered the pinnacle of yachting. The race was contested 45 years before the first Modern Olympic Games making it the oldest trophy in international sport. America’s rule of the race was finally halted in 1983 when an Australian boat designer named Ben Lexcen brought radical new ideas to the design of the Australian boat, the Australia II.

Ben Lexcen, formerly Bob Miller, was engaged to design the 12m class boat to challenge for the America’s Cup in 1974 by Alan Bond who could see great potential in Lexcen’s creativity and enthusiasm. For his 1983 challenge, Ben Lexcen revolutionised sailing yacht design with the creation of the winged keel. Described as ‘upside down’, the keel lowered drag, made the boat more stable and manoeuvrable, particularly in tacking duels. The key feature was reducing tip vortex, the turbulence resulting from the pressure differential between the windward and leeward sides, the same design idea that is used in the ends of modern airplane wings. This upside down profile and additional weight in the wings ensured that the ballast keel’s centre of gravity was now significantly lower than a conventional 12 metre design, as well as being a more efficient shape.

The revolutionary design and its peculiar advantages allowed other subtle changes to be made to the overall design of the vessel. It had the shortest waterline length ever measured on a 12m boat, radical vertical sail designs, all Kevlar running rigging and a lightweight carbon-fibre boom. Lexcen often remarked that Australia II was a whole boat, not just a keel.

Australia II has become one of the nation’s most recognisable vessels, thanks to that extraordinary America’s Cup win in 1983. Almost everyone knows about its winged keel that seemed to make it unbeatable. The keel completely spooked the Americans who tried many moves off the water to avoid having to race against Australia II, to no success.

Ben Lexcen’s winged keel revolutionised sailing yacht design forever, and he showed how challenging the accepted and established understandings of design can influence significant change for the better. In 1988, in his honour Toyota released the ‘Lexcen’ a rebadged Holden VN Commodore, which sold until 1997. It was built in Australia, under a plan devised by Labor minister John Button, to rationalise the Australian car industry. We could do with more politicians with Button’s vision, and more manufacturers commemorating our great designers and team players.