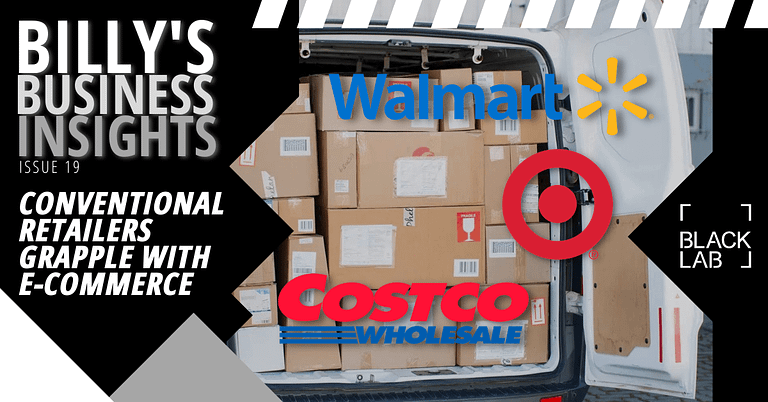 The global e-commerce market is expected to total $5.55 trillion in 2022. The explosion of the sector has been largely fuelled by American consumers and companies, with five of the top ten e-commerce companies in the world headquartered in the US.

When it comes to burgeoning e-commerce sales, most of us naturally think of the powerhouse online retailer Amazon. The innovative seller emerged a major winner of the pandemic, as consumers were forced to take their shopping online and businesses turned to its cloud computing unit, Amazon Web Services.

Capitalising on their existing brands, customer bases, facilities, supply networks, and extensive resources, conventional retailers have been able to successfully accustom themselves to the changing retail landscape. The pandemic was certainly an impetus for the brands to enhance their e-commerce capabilities, but development of web based stores and fulfilment had begun long before.

It is not, however, as simple as transferring product range to a web shop and waiting for the orders to roll in. Each individual retailer faced different challenges and held different advantages in the integration of e-commerce into their business models.

With over 4,700 stores across the US, Walmart was well established as a retail giant well before Amazon became a household name. Many may have thought Walmart was threatened by the rise of online shopping given their mammoth investment in brick and mortar locations, but in actuality it proved to be critical to selling merchandise online.\

90% of the US population lives within 10 miles of a Walmart store and this presented them a major advantage in the adoption of e-commerce. The existing stores were able to act as fulfilment centres with the added benefit of consumers being able to visit the location, making buy now, pick-up in store (BOPIS) an alternate option.

The success of the online integration can be seen in the numbers. e-commerce now makes up around 13% of its almost US$400 billion net sales. While Walmart trails Amazon by a wide margin in online sales, Walmart is gaining ground.

This has spurred the retailer to invest further into their e-commerce fulfilment capacity. Their Alphabot system uses automated bots to retrieve the items from the local fulfilment centre instead of a sales associate walking through a Walmart store to pack an order from the shelves. The items are then brought to a picking workstation, where the order can be assembled with speed.

Target bears some similarities to Walmart in regards to affordability and its product offering but Target has less than 1,900 stores and a greater focus on store design and customer service.

With regards to their e-commerce activities, like Walmart, Target utilises its own stores as fulfilment centres, it can fill nearly all its online orders in-store rather than trying to reinvent the last-mile challenge in e-commerce. Regardless of its comparable size to Walmart, the conventional retailer has seen impressive growth in its ‘digital sales’ in the last couple of years.

Target says digital sales represented 18.9% of its $106 billion in total revenue for the FY21, up from 17.9% for the previous fiscal year. Target CEO Brian Cornell said the retail chain believes stores are vital to growing its digital business.

Target has adopted an omnichannel system for its online order fulfilment. The efficiency of operating distribution from their stores allow them to offer click and collect, direct to boot and a same-day delivery service facilitated through their acquisition of Shipt.

An interesting point of difference for Target is in their ‘Target Plus’ online store. Unlike other marketplaces, including Amazon, the invite-only Target Plus program handpicks the sellers and brands allowed to list products on the site. Product listings don’t go live until they’ve been thoroughly vetted for their information, messaging and imagery. Target’s marketplace allows only one seller for any given product.

Costco’s business model has always been about driving people to its warehouses. The membership-based chain resisted efforts to even sell things on its website, well after Amazon had become a major player and even long after Walmart and Target made digital sales a priority.

Their supply chain is elegant and simple but relies on in-store purchase to facilitate the extremely low prices. By handling goods in full pallet quantities only Costco is able to receive goods from their suppliers at their depots and cross dock them directly onto a truck destined for the store. When the goods are received at the store the full pallet is either moved onto pallet racking or put in place right on the floor. This format posed a challenge to the adoption of online selling to the retailer.

With some innovation, effort and acquisition, however, Costco has been able to establish itself as a successful e-commerce retailer. Today, Some of Costco’s distribution centres in the U.S. and Canada also serve as fulfilment centres and the warehouse chain has a deal with Instacart for same-day grocery delivery, but it handles its own logistics for non-perishables.

Whilst Instacart is able to handle the delivery of Costco’s groceries, the chain also sells a lot of big and bulky non-perishables like televisions, exercise equipment and furniture. To facilitate online sales of these items, Costco acquired Innovel Solutions in 2020 (since renamed Costco Logistics), a third-party, end-to-end logistics company that provides “final mile” delivery and installation across the USA.

Whilst American corporations have fully embraced the consumers’ shifting preferences for online shopping – Australian retailers have been understandably slower to implement online fulfilment that matches the service realised in the US. With a considerably smaller population spread out across cities and towns separated by long distances, achieving a same-day responsive delivery system is a difficult and expensive task.

When it comes to groceries, though, the big supermarkets were forced to drastically refine their e-commerce facilitation during the pandemic lockdowns. Woolworths Group recorded $3.5 billion of e-commerce sales in FY21, up almost 75 percent year-on-year. Provision of the service proved vital to many Australians during the toughest days of lockdowns, and customers were pleased with the ability of the retailer to rapidly maximise the capacity of its online order fulfilment. So much so, that e-commerce use has continued to grow despite Covid limitations being almost non-existent.

The convenience and efficiency of Woolworths’ e-commerce system has proved attractive to consumers and this has encouraged further investment into the online arm of the supermarket giant. Part of its accelerated plans include opening a new automated online fulfilment centre in Auburn in Sydney’s West in 2024. The technology will allow hundreds of personal shoppers employed at the site to pick and dispatch up to 50,000 home deliveries a week across Western Sydney.

The development of the Auburn CFC builds on recent Woolworths investments in micro-fulfilment technology at its Carrum Downs and Maroochydore supermarkets. These use state-of-the-art technology to sort and move products from automated storage units directly to team members hand picking customer orders. These units can hold up to 10,000 of the most in-demand grocery products, while fresh fruit and vegetables and meat will continue to be picked from the shop-floor.