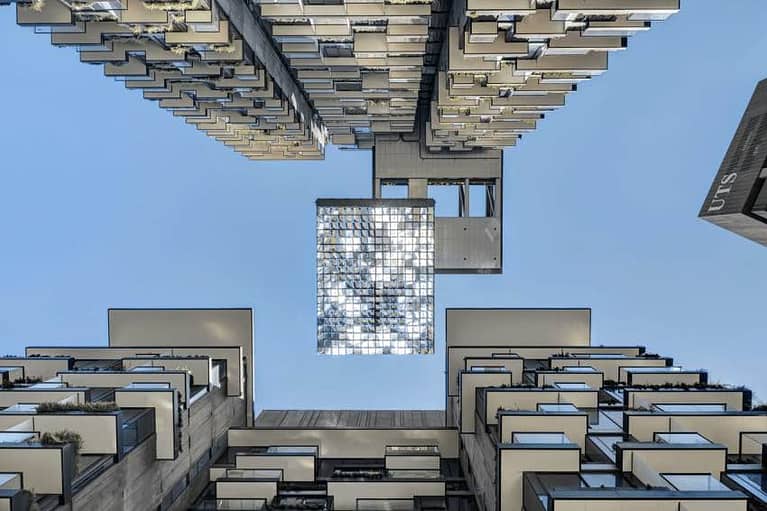 From the Electric Drill to Polymer Bank notes, the Cochlear Implant to Google Maps – despite the comparatively small population of this country, we over-deliver when it comes to game-changing design and innovation.

It’s not always singular design innovations altering the projection of an industry or a product that characterise our design landscape in Australia, it is also the willingness to collaborate with global leaders in design to facilitate the creation of projects on our home soil that set new benchmarks. A glowing example of this is the development of the ‘One Central Park‘ complex in Sydney – a particularly eye-catching residential and commercial structure completed in 2014 setting a new standard for sustainable building that showed how embracing ambitious design delivers impressive results.

One Central Park (OCP) sits on the former location of the Carlton & United Breweries Kent Brewery site in Chippendale, and was the first-stage of the $2 billion development of the area. The build drew the involvement of local and international players, such as Singaporean developer Frasers Property, French architect Ateliers Jean Nouvel, and Australian structural engineering consultant Robert Bird Group. Seeking to accommodate Sydney’s rapidly growing population and meet demand for more sustainable, greener developments, the master plan was created with the understanding that residential towers in proximity to the city’s CBD offered a preferred lifestyle choice than suburban sprawl, with their more efficient energy usage, lowered land impact and cost-effectiveness for infrastructure and transportation.

The OCP development represents a changing approach to building in Sydney, and indeed Australia, with its emphasis on brilliant design and environmental consideration. In the years before the project was undertaken, rapid new construction and short housing supply fuelled a conservative culture of cheap and fast projects that favoured minimal risk over design quality. Classified as a ‘State Significant Development’ under the direct approval authority of the Minister of Planning, the OCP has become a public quality benchmark.

There are some particularly unique inclusions in the finished project that make the One Central Park design so impressive from a design perspective, both internally and externally. Achieving the highest possible Green star rating under the Australian Green Star standards was done with a strict focus on a set of core sustainability strategies that took into account urban density, energy efficiency, decongestion through establishment of parks, building exposure, organic shading and solar energy. A multiplicity of design challenges that were all successfully answered through innovative design and planning.

The 67,000 square metre development includes a 30 megawatt central thermal plant built in a subterranean section of the original brewery site. It is the the first mixed-use development in Australia to incorporate such a facility, the central thermal plant reduces the sites carbon footprint with it’s use of a 2MW tri-generation set operating on natural gas to produce low-carbon thermal and electrical energy. It is expected to reduce the site’s greenhouse gas emissions by 190,000 tonnes over the 25 year design life of the plant – equal to taking 2500 cars off the road for the same period.

There is also a 1-ML/day blackwater treatment plant integrated into the building. This allows recycled water to be used for the thermal plant, irrigation, and domestic residential needs.

The One Central Park design externals are what truly sets it apart from any other developments in Sydney and has earned the project global recognition. There are two particular technologies, seemingly simple but highly impactful, that were integrated to answer the design challenges of exposure, organic shading and environmental efficiency. These are the hydroponics and the heliostats.

Walking underneath the towers along Sydney’s Broadway, one will immediately notice the impressive vertical gardens adorning the building’s facade and the imposing cantilevered platform of mirrors jutting out from the upper third of the taller tower. Whilst eye-catching and intricate, these features serve a purpose well beyond aesthetics. The plants on the building’s exterior are irrigated by the recycled water system and are growing in recyclable polyethylene planter boxes. By contrast to metallic louvres, the plants trap carbon-dioxide, emit oxygen and reflect less heat back into the city. Instead of maintaining and cleaning kilometres of external louvres, the body corporate employs a gardener who prunes and cares for the vegetation. Since the plants climb on vertical steel cables from slab to slab, their leaves are ideally positioned for shading even on the western exposures, and they can be custom-tailored to the thermal needs of each resident. As outlined by the projects architects:

“OCP reduces its cooling energy load with a five-kilometre-long system of linear slab-edge planters that functions like permanent shading shelves and reduce thermal impact in the apartments by about 20%. Additional shading from the plant foliage itself can further diminish heat gains by an additional 2-%.”

On the roof of the lower tower, 40 sun-tracking heliostats re-direct sunlight up to 320 reflectors on a cantilever off the taller tower, which beam the light down into an atrium, onto a pool deck and into the overshadowed areas. Because of the project’s massing, the atrium would normally receive no more than a few minutes of direct sunlight in the summer. With the heliostats however, it can be naturally lit all year, for any amount of time as the long as the sun shines. At night LED lights on the 320 reflector facets create a monumental urban chandelier that simulates reflections of glittering water from the nearby harbour. On a full-moon night, the heliostats redirect 40 reflections of the moon and make them visible in the park.

One Central Park is a State Significant Development that has skilfully asserted its place among Sydney’s architectural landscape with a deeply intelligent design that sets a new standard for high-rise development in Australia. The more recent Barangaroo Precinct for example has been certified as Australia’s first climate neutral precinct under the Climate Active Initiative. There will undoubtedly be more high-rise developments in Sydney’s future with the ever-increasing population, but if all of these are built with the same eye towards improving quality of life, efficiency and sustainability as the One Central Park Design was, we could expect a truly smart city of the future that puts design and thoughtful consideration above all.