Innovative Aussie Companies You Should Know About 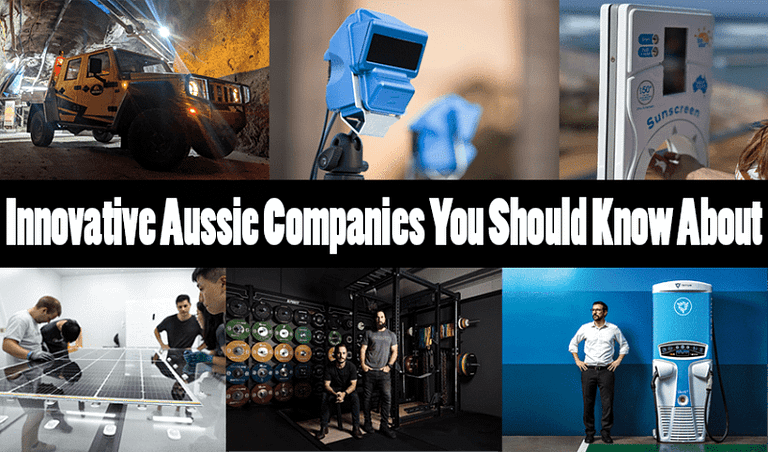 At Black Lab Design, we’ve always celebrated and promoted innovation in Australia. We are innovating every day to solve the problems our clients bring to us, so staying informed about all the great innovations coming out of Australia is important to us. Of particular interest are those companies that are working to change the perceptions of manufacturing abilities in this country. Where many assume the only great innovations born in Australia these days are in Fintech or Software (think Afterpay, Canva or Atlassian) there are a diverse range of specialised companies designing and manufacturing brilliant products in every corner of this country. With a focus on manufacturing, here are some of the innovative Aussie companies you should know about.

The first in our list of innovative Aussie companies you should know about is SunDrive. It is a solar technology start-up based in South Sydney. The company was founded by UNSW graduates Vince Allen and David Hu in 2015 to accelerate solar cell development in Australia.

More recently, the company announced it had assembled these impressive cells into modules, and integrated the modules into full-size, complete solar panels.

Tritium was founded in 2001 by University of Queensland Alumni Dr David Finn, Dr Paul Sernia and James Kennedy. Tritium has developed a portfolio of world-leading technologies that have been used in numerous solar car, electric vehicle and renewable energy projects globally.

The Brisbane-based manufacturer has been making waves with their pioneering DC fast-chargers for Electric Vehicles. Their fast chargers boast individual capacities from 50 to 350 kilowatt, and is one of the world’s top sellers in the area.

The company has been selling their infrastructure to global oil and transport giant Shell since 2020 and a new deal has seen them selected as a partner in pursuit of Shell’s ambition to operate 500,000 EV charge points by 2025 and 2.5 million by 2030.

Tritium was named “Chargepoint Manufacturer of the Year” by the Electric Vehicle Innovation & Excellence (EVIE) awards in the UK in October, and opened a new “world-class” EV charger testing facility at its Brisbane headquarters that will accelerate testing, prototyping, compliance, and certification of its equipment.

SunSquirt was founded by Kristofer Mcghee in 2014 after noticing a distinct and alarming problem with access to sunscreen in Australia. With many of us forgetting to bring our own sunscreens or not applying enough when out in the sun, Kris saw a need for a single-serve sunscreen dispensary device that was more readily available in places we need it.

To solve this problem, SunSquirt set out to design and manufacture a system of kiosks that could automatically dispense the perfect amount of sunscreen for users who needed it. They developed a range of portable and permanent sunscreen ‘vending machines’, manufactured in Australia that could be installed anywhere, indoor or outdoor, dispensing the highest quality Cancer Council sunscreen.

The customisable kiosks can be branded to meet the needs of schools, venues or public spaces and use 4G connectivity and intelligent software systems to communicate refill alerts, and are fitted with a content-driven media screen, displaying real-time UV updates and burn times, as well as educational information about sunscreen quantities and the correct application process. The kiosks have been widely adopted by schools, beaches, sporting venues and at events.

Baraja is a deep technology company founded by Frederico Collarte and Cibby Pulikkaseril in 2016 and is based in North Ryde, Sydney. The company has reinvented LiDAR (Light Detection and Ranging) for self-driving vehicles. Their groundbreaking ‘Spectrum-Scan’ platform is setting new benchmarks for precision, range and reliability.

The LiDar itself connects to wavelength-tunable laser to prism-like optics, deflecting the light in different directions to achieve scanning with higher reliability and lower cost. It’s designed to be more resistant to heat, shocks and vibration, and to be more affordable and reliable than other LiDAR systems.

The team has been focused on manufacturing and delivering the product for real-world applications in the industrial and mining industries in Australia. The Aussie startup has had machinery operating in the Australian desert, surviving in the harshest of conditions, for two years.

3ME Technology was founded in 2004 and is an Australian heavy-vehicle battery manufacturer designing and producing energy-dense, lithium-ion battery systems in a modular format to power mining and military electric vehicles (EV) and equipment.

3ME Technology is currently focussed on driving its technology into the Mining, Military and Marine industries. The ‘Bladevolt’ battery system will be the first large-format lithium-ion battery globally to be certified “intrinsically safe”, meaning the design has eliminated the risk of lithium-ion battery fire.

Their groundbreaking technology comes at a time where the mining industry comes under increasing pressures to decarbonise and clean up its operations. The adoption of electric-vehicles in mining operations is crucial to decreasing environmental impact and improving the safety of those working underground where diesel vehicles are emitting large amounts of carbon monoxide in the enclosed environments.

Founded in 2012 by brothers Jamie and Bobby Montesalvo, AlphaFit manufactures and supplies gym equipment. The Gold Coast based family-owned company draws on the three generations of manufacturing experience in Australia to produce and deliver high quality fitness and exercise equipment.

Innovation has empowered AlphaFit to continue manufacturing on Australian shores and to create jobs and skills in their local community.

AlphaFit has proven that Australian based companies can compete with offshore manufacturers in the fabrication and delivery of even heavy and bulky products such as gym equipment. By facilitating the supply of exercise equipment close to their buyers, they are helping customers cut delivery costs, improve the level of service and customisation and decrease reliance on imports.

SPEE3D was founded by Byron Kennedy and Steven Camilleri in 2015 and is based in Dandenong, Victoria. The duo have worked together since their university days competing in the World Solar Challenge.

SPEE3D printers enable the most affordable metal additive manufacturing process in the world. They make metal parts the fastest way possible, leveraging metal cold spray technology to produce industrial quality metal parts in just minutes, rather than days or weeks. The process harnesses the power of kinetic energy, rather than relying on high-power lasers and expensive gasses.

Rounding out our list of innovative Aussie companies to know is BlockTexx. BlockTexx was launched in 2018 by Graham Ross and Adrian Jones, based out of Manly, NSW. Both with backgrounds in the textile industry, Ross and Jones were acutely aware of the waste problem facing the fashion world, with about 100 billion garments a year heading to landfill.

The company has developed their breakthrough ‘SOFT’ (separation of fibre technology) process, which is able to reclaim 98% of resources from cotton and polyester garments, the two most-used fabrics in the textile world. The technology can turn used cotton products into cellulose fibres and polyester into polyester chip, a marketable commodity.

There are plenty more innovative Aussie companies you should know about, but we think these ones are pretty cool! Keep an eye out for these companies making waves in 2022.