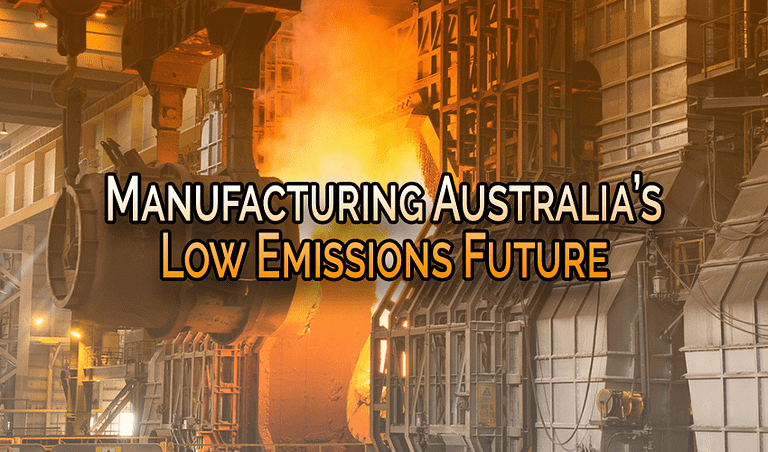 In last week’s article we investigated the feasibility of a manufacturing revival coexisting with real and effective climate action in Australia. To follow this up, we are taking a look at some of the expert analysis of the challenges and opportunities present in establishing low emissions manufacturing.

This is thanks to the newly released Special Report conducted by Manufacturing Australia and L.E.K Consulting; Low Emissions Manufacturing: Australia’s Opportunities.

The paper has been prepared to assist policymakers, industry and interested members of the public to better comprehend the facets of a successful transition to low emissions manufacturing. Drawing upon a deep pool of industry knowledge and exposure, Manufacturing Australia has been able to provide a detailed breakdown of a transition with a focus on four of the most energy intensive manufacturing sectors; steel, ammonia, aluminium, and cement/concrete.

As well as examining the numbers associated with industry transition, the report works to show why maintaining and growing Australia’s manufacturing capabilities through that transition is important to the nation’s longer-term economic sovereignty and security.

In this article, we are sharing some of the key outcomes of the hundred-page report’s analysis.

We talk at length about the importance of onshore manufacturing for Australia’s economy, self-sufficiency and communities and with the Special Report’s breakdown of the numbers, we are able to quantify the contribution of the industry to further support these assertions.

The Australian manufacturing industry contributed around 5.6% of GDP in FY2019/2020, representing over $108 billion of annual gross value added to the Australian economy. This is across an extremely diverse range of manufacturing outputs, from the vital elements of modern infrastructure like chemicals, metals and building materials through to our vast food products sector and into the broad advanced manufacturing field of highly specialised producers.

Despite a smaller GDP contribution in comparison to the mining industry, manufacturing accounts for a higher percentage of employment. Approximately 7% of Australia’s workforce are employed in manufacturing, a touch under 900,000 people whereas mining supports a little over 2%. These roles are defined by highly-skilled, well-paid and full time employees, with mean incomes in the manufacturing sector sitting about 28% higher than the national mean income.

One such activity along the production curve that is adding enormous value to the sector and in-turn, the nation’s economy, is research and development (R&D). With an intelligent and capable flow of talent through our workforce, Australian manufacturing’s investments in automation, innovation and R&D are leading the way. Per FY2018 statistics, manufacturers are spending upwards of $4.5 billion on R&D representing the greatest proportion of GDP contribution on R&D out of any sector.

The importance of R&D investment can be seen through the example of Dulux Group’s adoption of advanced manufacturing technologies in their Merrifield plant. The $165 million investment established global best-in-class paint manufacturing in Victoria by embracing automation and innovative factory design. The integration of industry 4.0 technologies has made the new facility one of the top five Industry 4.0 batch plants in the world, reducing production time by 87.5% and drastically reducing the amount of raw material ‘touches’ required. Efficiency is improved, wastage is all-but eliminated and upwards of 60 highly skilled, safer and valuable jobs are created.

In essence, manufacturing’s contribution to Australia is substantial. It is pivotal to value-adding in the economy, provides a large number of skilled and high paying jobs, encourages major commitment to innovation and R&D investments, boosts our sovereign capability and will underpin efforts to close the loop in the circular economy at the environment’s benefit.

‘Net-zero by 2050’ is, on the surface, an ambitious goal. Particularly in Australia where much of our livelihood has depended on extractive industries with large environmental footprints. A transition will undoubtedly be challenging, characterised by extensive investment, major policy reform and time-consuming infrastructure facilitation. However, low emissions manufacturing technologies are real and provide viable pathways to net-zero by 2050. The report explores these pathways in great detail across the four previously mentioned sectors, steel, aluminium, ammonia and cement and are summarised below.

From the reports in-depth analysis of each of these major manufacturing sectors in Australia, we can see that across the board, globally competitive energy inputs are paramount to achieving net-zero emissions targets whilst retaining the strength of these industries. The process is high-risk with high-reward. Direct electrification using clean electricity, hydrogen as a feedstock, hydrogen for heat and carbon capture, usage and storage are key long-term pathways. But many of these technologies are in their infancy globally, and require significant improvement before they can be deployed at scale.

In releasing this report, Manufacturing Australia, and the industry as a whole, are encouraging governments to accelerate low emissions manufacturing technology co-investment as well as the building of the necessary clean-energy infrastructure. Further, they are highlighting the need to stimulate demand for ‘green manufacturing’ through procurement, accreditation and consistent national standards. Underpinning all of this is the necessity of investment incentives that de-risk capital investments in low emissions technologies for manufacturers to level the playing field for trade-exposed industries in Australia.