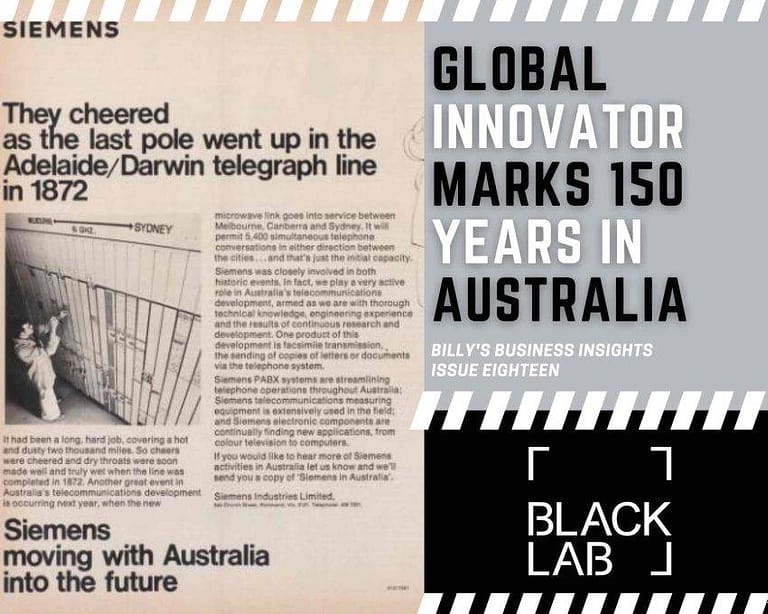 150 years ago, using terms like Internet of Things, digitalisation and even automation would have been met with outright confusion. Today, anyone in manufacturing is well aware of how pivotal understanding these concepts is as the industry continues to familiarise itself with the fourth industrial revolution.

German multinational conglomerate, Siemens AG, is the largest industrial manufacturing company in Europe and one of the most significant drivers of the shift to Industry 4.0 technologies at present.

In 2022, Siemens is celebrating 150 years of innovation on Australian soil. Siemens’ involvement in Australia began in 1872 with the commission of the historic Overland Telegraph Line. One of the most important pieces of infrastructure at the time, the 2,700km telegraph line allowed the transmission of messages between Adelaide and Darwin, and opened up telegraph communications between Australia and the world.

With the submarine cable between Java and Port Darwin completed in 1871, the Overland Telegraph Line was linked upon completion, creating a direct connection to Europe.

The European link ultimately resulted in significant economic benefits for the Australian colonies. The rapid exchange of commercial information allowed better coordination of the supply of and demand for agricultural produce, manufactured goods and raw materials. The ability of overseas investors to keep track of changing conditions in Australia encouraged investment and speculation in mining and other ventures.

Additionally, the new telegraph link facilitated the rapid arrival of news. News items could now arrive within hours of being written in Europe, rather than taking weeks or months to come by sea.

Since their first foray into Australia all those years ago, Siemens has grown and adapted in the market, setting the tone of innovation and providing the technologies to suit a rapidly developing industry. Today, Siemens’ “automation and digitalisation enable everything from vaccines and blood plasma production through to beer, agriculture, dairy, water, mining and the most advanced reef simulation in the world,” says Chairman and CEO of Australia and Pacific Jeff Connolly.

The systems that Siemens integrates today are being adopted by some of Australia’s most well-known and loved brands such as the oldest family-owned and run brewery in the country, Coopers Brewery. Started in 1862, the brewery now resembles a high-tech laboratory, thanks in-part to the technology and systems integrated by Siemens.

The Adelaide Brewhouse was commissioned from the ground up with Siemens automation. It utilises a Laboratory Information Management System (LIMS), and the Manufacturing Execution System to manage incoming raw materials, in-process products and finished goods analysis, making sure the products they produce are right the first time, every time.

To honour the legacy of a century-and-a-half of innovation in Australia, Siemens has launched the Beyond 150 Competition, a unique series of monthly competitions that will take winners to some of Australia’s most dynamic locations – from the Sydney Harbour Bridge to the captivating expanse of the Great Barrier Reef – and provide them with an immersive behind-the-scenes look into how Siemens technology transforms the everyday. The competitions are open to all professionals, of all industries.

Read Next: Manufacturing Success Hinges on Research and Development